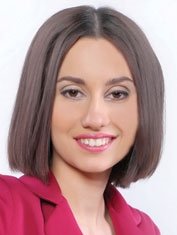 Patent and Trademark Attorney of Ukraine, Director of Patent Law Company IPStyle. Mrs. Ortynska graduated from Kyiv-Mohyla Academy and received her Master Degree of Intellectual Property from the State Institute of Intellectual Property. Mariya is a “thought leader” on developing intellectual property protection strategy, including trademark protection of nationals and internationals companies. She also provides services on developing IP strategy.

Patent law company IPStyle focuses on intellectual property projects. For over 8 years we have been helping our clients to protect their creations and inventions. The approach to every project is unique. Therefore, we collaborate closely with business and industry consultants to make personalized business solutions for our clients based on the applicable IP law of Ukraine. We have in-depth experience both in trademark and patent law, and that's why we use complex approaches for cases involving intellectual property. Our experts focus on developing intellectual property protection strategy as well as the tax aspects of IP projects, including royalty, payments for transferring rights.

Due to our professionalism and specialized comprehensive approach, our customers include confectionery, dairy and pharmaceutical companies, information technology firms, etc. Our service is client-oriented and flexible.

Both Ukrainian and foreign patent systems are intended to protect the rights of inventors or companies, directed on creation and implementation of new developments. But there are still “innovative” companies which, in the 21st century, “invent” appearances of hangers, toothpicks, auto parts, bottles and many other products. In most cases, such appearances are not new, and the patent is granted only to abuse intellectual property rights. What is the reason for such activity? Unfair enrichment. These companies are usually called “patent trolls” or non-practicing entities. The origins of the trolls are taken from the USA. The first successful patent troll, George Selden, in 1879 filed a patent application for a gasoline car engine. A large-scale wave of patent claims occurred in 1880, when there were thousands of re- gistered patents for small features of well-known technologies. Today, patent trolls make money out of thin air almost by blackmailing a company with claims for patent infringement.

If we compare Ukrainian patent trolls and the trolls of other countries, the main difference arises about an IP object. In Ukraine it is an industrial design, in other countries an invention.

A design patent is valid for 10 years from the date of filing of the application, and may be extended, but not more than for 5 years.

The object of the industrial design can be a shape, picture, or coloration, or their combination, which define the appearance of an industrial product.

According to Ukrainian legislation a design patent is issued under the applicant’s responsibility. The requirement of novelty for an industrial design in Ukraine shall be met, though there is no substantive examination. In practice, any company can obtain patent for not a new decision.

Thus, it is possible to patent any bottle, hanger, appearance of a mobile phone or auto parts. Some companies patented practically an entire industry. For example, one company in  Dnepropetrovsk has registered more than 200 industrial designs in two years. Among these designs are bolts, lights, radiators, fuel filters and many other auto parts. It is noteworthy that today all these pa- tents has been transferred to ELAST HOLDING LTD, a company registered in Belize (USA).

As a general rule, patent trolls are specially active in Customs. In 2012 the new Customs Code of Ukraine came into force. Thereafter, the business of trolls increased and acquired a systemic nature. The Code provided an opportunity to enter a design into the Register in order to protect IP rights. It enabled not just to patent not new appearances, but also to suspend customs clearance. This meant the activity of foreign conscientious competitors is blocked.

The situation is also complicated by the fact that there is no open re- gister of design applications. In this regard applications are not available and there is no possibility for filing of protests at the application stage. In other words, if someone has applied for not a new object, you are not able to conduct a search by filed application or learn about the case. And so you will find out about such unfair actions after registration or, in the worst case, when the customs’ clearance of your products is suspended.

Note that a patent can be canceled only by a court decision. Of course, it will take time. Moreover, in practice, this situation arises while a company is trying to invalidate one object, the same patent troll files another application for the same object. In this regard, the fight against patent trolls looks more like fighting windmills.

Paradoxically, in the EU designs pass only formal examination too, but there is no such trolling. This can be explained by a completely different way of thinking. Applicants realize that these abuses involve responsibility.

In Ukraine, as a rule, a company is limited to patent invalidation when dealing with a patent troll. Other responsibilities are not used. For example, companies are not attracted to loss of profits compensation. It should also be noted that one of the reasons for the prospe- rity of patent trolls is their impunity. Indeed, the maximum that a patent troll loses in the case of invalidation of a patent is fees and services of a patent attorney paid to them during patenting.

In the United States there is a procedure of patent substantive examination before the issue date. According to Article 1391 of the Civil Code of Russian Federation such examination for design is required as well. But in Ukraine it is difficult to implement because it will prolong the application term. Staff and resources problems will arise, there are no experts for examination.

An appropriate solution to the problem could be the adoption of a law concerning amendments to the Design Act proposed by State Service of Intellectual Property. The Draft includes the following changes:

— design applications are published before the granting of a decision on patent;

— possibility to file an opposition in the course of two months from the publication date.

That is, to say, this project provides an opportunity before the granting of a patent to get acquain- ted with the materials of application. In case a company believes that the application is filed for not a new object and there will be risk of abuse of rights, it can file a protest with the arguments against the issuance of such a patent. On the one hand, companies will have to monitor all submitted applications, but on the other hand, it is better than to invalidate patents on a hanger, gloves and toothpicks later in court.

In general, the solution to a problem must be complex. To start with changes to the law regarding the publication of application and protests, the responsibility for the abuse of rights. Companies whose rights have been abused should take the initiative, including claims for compensation of damages caused by such unfair actions.

We hope that the Draft will be accepted shortly and will help to deal with patent trolls.

Noticeable, Ukraine signed and ratified the Association Agreement with the EU, and according to it our legislation on design should be harmonized with EU standards.

As for the Agreement, we can define the following key changes, some of which will also help in the uphill struggle with patent trolls:

1. The individual nature of design shall be met as new patentabi- lity criteria. To be patented a design should be new. The Patent Office of Ukraine has no authority to refuse such registration and, as a result, such not new appearance is protected. Unlike novelty (the indicator of the fact that a design’s essential features does not become known in the world before the filing date), an individual nature will mean that the overall impression it produces on the informed user differs from the overall impression, which another design produces on the same user. For example, how can one identify brake pads or a cooling radiator’s individual character? And so the criteria for patentability of the industrial design will be more stringent in Ukraine and will complicate the life of patent trolls.

2. Protection for unregistered designs will be provided.

EU legislation provides protection for both registered and unre- gistered designs. Thus, in accordance with Article 11 of Council Regulation No.6/2002 on Community designs of 12 December 2001, a design shall be protected by an unregistered Community design for a period of three years from the date on which the design was first made available to the public within the Community.

This provision is important for those companies that:

— produce a lot of different products and after analyzing the most popular models take a decision on subsequent patenting;

— develop products with short-life cycles, such as a gadget that will be popular on the market only for 1-2 years.

According to Article 213 of the Association Agreement between the European Union and Ukraine, unregistered designs made available to the public shall confer the same exclusive rights, but only if the contested use results from copying the protected design.

It should guarantee and stimulate owners to produce and output new models on the market without fear that their design can be stolen by competitors. Also, if the company has received a claim from a patent troll with respect to patent infringement, it can refer to the protection of unregistered design.

In summary, we want to point out that this problem is up-to-date in Ukraine, especially for importers and exporters. At present, they have few options:

2) establishment of prior use right. This option is provided by the Civil Code of Ukraine. Any person who before the date of application for an industrial design (or, if priority is claimed to priority application date) in its interests used the design in Ukraine in good faith or made considerable and serious preparation for such use, shall be entitled for free use (right of prior user).

Unfortunately, such a right can also only be set by a court, which is complicated for fair companies.