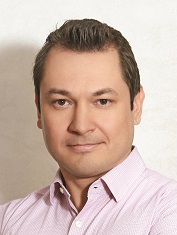 Attorney-at-Law, Patent Attorney and Partner, Pakharenko & Partners. His practice in the field of IP encompasses consulting on all aspects of IPR protection, licensing and enforcement, representing clients in law-enforcement and customs agencies, civil and commercial courts, legal counseling on anti-counterfeiting and anti-piracy measures and developing anti-counterfeiting and anti-piracy strategies

Pakharenko & Partners was established in 1992 and is one of the leading players among intellectual property and law firms in Central Europe with offices in Kiev and London.

The firm provides full IP service coverage to develop successful protection and enforcement strategies for our clients, covering the development of IP portfolio; acquisition and commercialization of IPRs; assistance in conducting market research and market monitoring; and management and enforcement of IPRs at national and international level. Pakharenko & Partners deal with all intellectual property assets, including patents (inventions and utility models), designs, trademarks and geographical indications, domain names, copyright and related rights and plant breeders’ rights.

The company has assisted in drafting intellectual property legislation and now continues to act as advisors to a range of government agencies.

The company’s services in this field cover: registration of IPRs in the customs register and representation of clients following customs seizures; investigation of infringements; trap purchases; sending warning letters and notices to infringers; drafting and filing applications to the police in order to initiate criminal actions and cooperation with the police in preparation for raids; legal counseling on anti-counterfeiting and anti-piracy measures and developing anti-counterfeiting and anti-piracy strategies; and finally representation in courts in criminal and civil cases brought against counterfeiters.

When we look into the main interests of major investors and businesses we will note that the protection of business reputation acquired over many years and tied particularly to the high quality of goods and services associated by consumers with a specific brand, is among their key priorities. It is common knowledge that a good reputation can be easily tarnished, particularly by counterfeit goods, therefore anti-counterfeiting and anti-piracy form a special focus in our activity linked to close cooperation with the police and customs service.

The manufacture and sales of counterfeit goods are criminal activities that affect almost each of us. According to the latest data published by the UN, the annual global sales volume of counterfeit goods is about USD 250 billion. Almost all consumer goods are being counterfeited, and fakes are sold nearly in all countries of the world. This illegal business has already formed as a part of a huge criminal industry, and its scale can be only compared with drug and arms trafficking. Consumers perceive counterfeits as a cheap (and usually low-quality) alternative to original goods, despite the fact that some types of fake goods, such as pharmaceuticals, toys, spare parts for cars and aircrafts, fertilizers and pesticides pose serious threat to their health and safety.

It is important that there is a clear understanding that counterfeit goods cause harm not only to each individual consumer but also to the state as a whole, taking into account the loss of billions of Hryvnyas of potential tax revenues to the Ukrainian state budget, the reduction of foreign direct investments as a result of the country’s lowered investment attractiveness, growing corruption and crime rate, as well as the lack of fair competition on the market.

Talking about strategies for clearing the market from counterfeit goods, our first recommendation is always to register IPRs in the Customs Register.

Currently, the Customs Register of IPR Objects includes nearly 2,500 records related to trademarks, inventions, utility models and industrial designs registered at right holders’ requests, and the number of registrations is continually increasing. The number of detentions of goods suspected of IPR infringement and violation of customs rules involving transportation of goods with IPR infringement is also growing. In most cases, such detentions result in the destruction of counterfeit goods and impositions of fines provided by legislation.

Another useful tool provided by registration with customs is ensured through recorded information on all authorized importers/exporters in the customs register, which helps to control goods coming through unauthorized channels.

In cases of detention of counterfeit goods by customs, IPR holders may rely either on out of court settlement, or on judicial procedures. If an importer acknowledges the infringement of rights and agrees to conclude an amicable agreement, he will not be held liable under administrative provisions, while the detained counterfeit goods will be destroyed under the simplified procedure. However, should an importer not recognize the infringement of right holders’ rights, the rights of the latter can be enforced through either an administrative or civil court procedure.

We have been closely cooperating with customs for an extended period of time, starting from the adoption of the IPR enforcement provisions in Ukrainian laws. The year 2014 brought the following results: 11 IPR objects were registered in the Customs Register (in total we act as a legal representative for a number of IPR holders before customs, representing 90 IPR objects), more than 250 customs notifications on the seizure of goods were processed.

Nearly 10% of such detentions resolved in amicable agreements with infringers, providing for their consent to apply the simplified procedure of destruction of counterfeit goods, or altering the identification marks on goods or their packaging as provided by the Customs Code of Ukraine (CCU). In cases where it was not possible to remove identification marks from goods, those goods were destroyed. For example, there was a case involving the importation of 63,360 graphic pencils, in which an amicable agreement was concluded with the importer who agreed to follow the simplified procedure on destruction of counterfeit goods.

In some cases, customs compiled protocols under Article 476 of the CCU. Those, for example, included cases related to seizure of sports shoes which were transferred to the court. Also, there also a positive decision in a case related to seizure of 5,000 rubber bracelets. Yet another example is a case involving the import of sealants for cars. In this case, provisional measures were secured and a claim filed before the commercial court, which ultimately was allowed in full. The court issued a decision on prohibition of import, removal from circulation and destruction of counterfeit goods.

As regards anti-counterfeiting operations within the country, in case the police detects counterfeit goods (either manufactured within Ukraine, or smuggled into the country without seizure by customs officers), IPR holders can rely on the mechanisms provided in the framework of administrative, criminal and civil proceedings.

We develop anti-counterfeiting and anti-piracy strategies for the Ukrainian market, taking into account the nature of a particular industry and specific circumstances of each case, starting from market monitoring, identification of counterfeits and investigation of the supply and sales chains to litigation before the court.

Last year, our company’s anti-counterfeiting and anti-piracy department provided legal support in about 200 criminal proceedings (47 of which were initiated in 2014).

Among the landmark cases dealt with by the anti-counterfeiting department, the case related to unauthorized use of a famous trademark used for equipment (chainsaws, grass trimmers, etc.) should be mentioned in particular. This case involved assembling counterfeit goods from components. The court punished an infringer with a fine in the amount of UAH 17,000, and based on the respective court decision over 3,000 counterfeit devices and components were destroyed.

Initially the right holder’s civil claim was allowed in part. The court’s refusal to allow the claim in full was based on the assertion that the fact of sale of these goods itself, revealed at the defendant’s home and warehouses, had not been established, and so the counterfeit goods had not been marketed (put into commercial turnover) and, therefore, no actual damage had been caused.

The right holder did not agree with such a verdict and filed an appeal in which he noted that during the court hearing the defendant admitted that in the period from 2011 to 2014, despite  receiving a warning letter from the right holder and being aware of the infringement of trademark rights, he was purchasing chainsaws made in China, attaching to them the logos and stickers with the right holder’s trademarks, storing the fake goods and selling them at a market in Chernivtsi as well as through the “Nova Poshta” express delivery service. In light of the established facts and based on the provisions of Ukrainian legislation, there are sufficient grounds to assert that at the very moment when the infringer knowingly purchased fake goods and components and attached the logos and stickers with the right holder’s trademark to the goods, he caused damages to the rights holder and committed a socially dangerous act, even if such counterfeit goods were not sold.

The appellate court accepted these arguments and allowed the right holder’s appeal. According to the resolution of the appellate court, when qualifying the defendant’s actions based on the respective articles of the Ukrainian Criminal Code, the pre-trial investigation bodies and the court of first instance did not take into account that the disposition of this law provides for the criminal responsibility not for the sale of goods bearing the trademark, but for the unauthorized use of a trademark. Therefore, the defendant’s acts related to unauthorized trademark use related to the same criminal intent. Therefore they were re-qualified by the court which ruled on the application of the respective sanctions, thereby allowing the right holder’s claim in full. As a result, the defendant recovered the material damage in full scope.

Despite the active work of Ukrainian customs and police, as well as right holders’ efforts, counterfeit consumer goods making their way to the counters are in abundance. This is why it is necessary to work on raising public responsibility and awareness about the actual situation. Considering the global scale of the issue and the tight link between counterfeiting and organized crime, the problems of combating counterfeiting require consolidated efforts on the part of the whole of society. Each of us should realize that when purchasing fake products we hamper the development of the domestic commodity market, national science, implementation of modern technologies, manufacture of quality goods, while such a purchase eventually affects our own health and welfare.