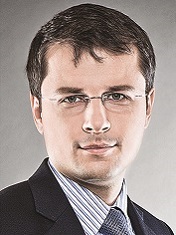 AstapovLawyers International Law Group is one of the leading CIS-based full-service law firms with over 12 years of experience with offices in Kiev, Moscow and Almaty. AstapovLawyers is among the TOP-4 leading law firms in Ukraine (Forbes/Yuridicheskaya Practika Publishing), TOP-30 largest law firms in Russia (“Kommersant”) and growing fast in Kazakhstan. Timely, practical, comprehensible and concise counsel with a clear action plan and guidance is the standard we adhere to.

The firm employs over 120 professionals. Most of the firm's practitioners have completed post-graduate studies in the US, UK and EU countries.

Over the past years, the firm has grown and is now one of the most dynamic and fast-growing full-service law firms on the Ukrainian market. The firm provides top-notch legal expertise in dispute resolution, international arbitration, corporate and M&A, competition law, energy and natural resources, international tax planning, intellectual property, international trade and WTO, real estate. AstapovLawyers advises companies from key sectors of the economy, including banking, financial, real estate, trade, agriculture, energy, automotive, pharmaceuticals and healthcare, as well as telecommunications, manufacturing and many others. For each client AstapovLawyers provides a tailored approach depending on its location and peculiarities of doing business.

The continuing political and economic turmoil in Ukraine has spired many long-existing problems in the country’s banking sector, including loose protection of depositor rights and significant number of shell banks used for tax evasion purposes. The government is struggling to restore the faith of consumers in the banking system through a number of measures aimed at making the banking sector viable and healthy. The measures include, but are not limited to, enhancing corporate governance in banks, winding-up a big number of insolvent banks, making the shareholding structure of banks more transparent.

The approximation of corporate governance standards of Ukrainian banks to best market economy practices started early in the modern history of Ukraine since coming into force in the On Banks and Banking Activity Act of 1991. In 2000 the Act was revised by Parliament and re-adopted in its current wording with further amendments. The standards were further developed and explained in the Decree of the National Bank of Ukraine On Guidelines for Improvement of Corporate Governance in Ukrainian Banks of 28 March 2007.

The coming into force of the On Joint Stock Companies Act of 17 September 2008, however, brought inconsistencies into the regulation of corporate governance of banks incorporated as joint stock companies. In addition, rules set out by the On Banks and Banking Activity Act for corporate governance proved to lack clarity and robustness.

Accordingly, Parliament has once again revised corporate governance principles in banks and passed amendments to the On Banks and Banking Activity Act coming into effect as of 10 January 2015.

The major improvements are built on the principles for enhancing coporate governance of the Basel Committee on Banking Supervision. In particular, the following changes were implemented:

— Banks were required to avoid conflict of interest;

— Authorities of bank governing bodies were clearly delineated, and the checks and balances system was improved;

— Board composition rules were revised to ensure quality and independence of members;

— An Internal audit system was revised to ensure due internal control;

The amendments clarified the fiduciary duties of executives and Board members. In particular, executives and Board members shall withdraw from any decisions if they are unable to perform their obligations in the best interests of the bank, depositors and shareholders due to conflict of interest. Also, the Board shall use all its efforts to avoid any conflict of interest situation and shall report on such situations to the Central Bank — the National Bank of Ukraine.

In line with the tradition of continental law, the law also provides for a definition of the conflict of interest deemed as “existing and potential contradictions between personal interests and official or professional obligations of a person that may affect due executions of his powers, non-partisanship and objectivity”.

These clauses were introduced with the aim of countering self-dealing, a corporate authority misuse rather popular with management of Ukrainian banks. And they are deemed to reach the expected impact, in combination with the newly introduced authorities of the Central Bank to require dismissal of the infringing executives and Board members.

The Powers of Governing Bodies

The amendments affirmed that the governing bodies of a bank consist of the shareholders’ meeting, Board and board of executives.

The amendments significantly extended powers and elevated the role of the Board in management of bank affairs. The Board was recognized as the principal governing body which performs the general management of bank activities, controls executives board, protects shareholders’ rights, and defines strategy, business plan, risk management policies in a bank.

Also, it was clearly stated that the chief executive officer of the bank bears personal responsibility for a bank’s activities. This adds up to the so-called “piercing of the corporate veil” principle in Ukrainian banks established in 2012, i.e. personal responsibility of major shareholders (holders of 10% and more voting rights) to recover losses of depositors based on a court decision in case of the bank’s insolvency due to shareholders’ fault. These clauses are expected to deter management and major shareholders from funneling away a bank’s liquid assets.

The mandatory minimum Board composition was expanded from three to five members. In addition, amendments set out the education criteria to be met by appointed members: at least ¼ of the Board (or at least two members) shall have master’s degree in law or economics, and other members shall have a master’s degree in management. Moreover, the Board shall now have at least two independent members. These requirements are called to make Board practices more transparent and exercise sound objective judgment.

The amendments significantly strengthened role of the National Bank of Ukraine as central supervisor and regulator in the banking sector.

In particular, the National Bank of Ukraine is now allowed to require termination of office of the Board member and/or replacement of any executive of the bank. Given that grounds for such requirement were loosely defined by law as professional unfitness and inadequate business reputation, the central bank may use such authority to the fullest possible extent.  Also, the National Bank of Ukraine may now initiate extraordinary shareholders’ meeting. This authority complements the authority to require termination of a Board member office, as decision on such termination shall be passed by the shareholders, and enhances the ability of the Central Bank to protect interests of minority shareholders and depositors.

Requirements to banks’ internal audit system were revised to ensure credible reporting, due internal control over compliance with laws and internal standards. In particular, it was enacted that:

— banks provided the National Bank of Ukraine with annual reports on performance of the internal audit department;

— the National Bank of Ukraine defined specific requirements to professional qualifications of the internal audit department;

— the internal audit department is not subordinated to executives of the bank and reports directly to the Board;

— head of internal audit department cannot hold office in any other entities;

— head of internal audit department may initiate extraordinary meeting of the Board;

— appointment and dismissal of the head of internal audit department shall be approved by the National Bank of Ukraine.

The above summarized measures target several important goals, including:

— attracting international investors into the Ukrainian banking system; and

— restoring the faith of consumers in the banking system.

The goals will surely be met only as part of reforms larger than this fraction of changes in the banks’ corporate governance. Undoubtedly, both the Ukrainian government and Parliament recognize that the reform of judicial system and law-enforcement agencies to exorcise bribe and corruption form the main core of many other positive changes in the country, including revival of the banking system.