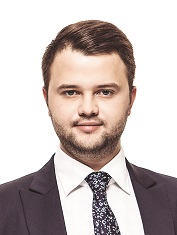 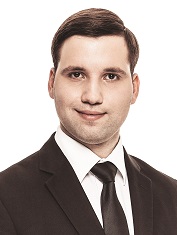 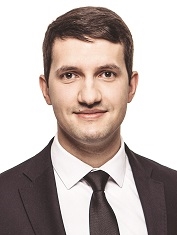 Senior Associate at TCM Group Ukraine. He specializes in resolution of international disputes in the field of multimedia. His practices: international commercial debt collection, international litigation, mediation and restructuring, recognition of foreign judgments and arbitral awards, and bankruptcy. 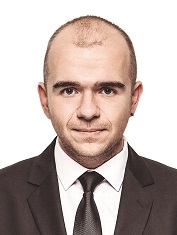 TCM Group Ukraine is a Ukrainian office of TCM Group International Ltd., which is a unique alliance of 35 law offices and 110 agencies, practicing international commercial dispute resolution in a total of 145 countries.

TCM Group International was established in 1987, when a small group of globally minded credit management law firms and debt collection agencies, primarily located in the Pacific Rim, banded together to combat the rising tide of outstanding receivables and collection costs in international trade.

Over that time, the Group has acquired a first-class record in enhancing the cash flow for the vast majority of its clients by delivering sound credit management services and, above all, the successful recovery of international accounts receivables and delinquent debts, both amicably and through court settlement.

With over 25 years of experience in global credit management and debt recovery, the offices of TCM Group International have developed an understanding of complex legislative, cultural and logistical challenges their clients face in recovering outstanding receivables across multiple boarders, languages, cultures, time zones, and currencies.

Since 2014, TCM Group International has been represented in Ukraine through its office in Kiev, providing Ukrainian clients with a unique opportunity to access its offices worldwide.

Ever-increasing cooperation among companies operating in various sectors of the economy is an essential feature of modern business relations. However, it is often hard to avoid conflicts, especially when a lot of money is at stake.

Sometimes, it so happens that business partners interpret certain contract clauses in a drastically different way. It may also be the case that one of the parties to the contract has faced financial or organizational difficulties, making the execution of the contract extremely difficult. At times, one of the parties may defraud its business partner in order to get personal gain through unlawful means. In any case, the situation when one company makes a complaint against another company constitutes a commercial dispute. However, if an international commercialdispute arises, it is even harder for a complaining party to persuade its business partner to meet its obligations under the contract.

A debtor can be located in another country. Possibly, the representatives of the debtor do not speak the language of their creditor, and their working hours may not always coincide. The finances of the debtor may be handled in another currency. Importantly, the business of the foreign debtor is always regulated by a different legal system, making it extremely challenging for foreign lawyers to sue the debtor.

In order to overcome the above-mentioned difficulties, it is crucial for the creditor to be represented by local lawyers in the country of the debtor. It may be a challenge to find a trusted and experienced attorney that will not overbill the foreign creditor. Moreover, the initiation of a foreign litigation can be quite expensive in terms of court and legal fees, and is usually very time-consuming.

Alternative dispute resolution provides settlement of the existing disagreement among business partners without traditional recourse to courts. Dispute settlement lawyers use specific techniques that allow parties to reach a solution acceptable for everyone.

In general, alternative dispute resolution includes three main streams. First, lawyers often initiate negotiations between the representatives of the creditor and the debtor. As practice shows, the ineffective communication between business partners is one of the major causes of commercial disputes. In such cases, experts in alternative dispute resolution do preparatory work in order to conduct successful negotiations for their client. Often, this procedure proves to be extremely effective, especially when the breaching party is interested in preserving the business relationship with its partner.

The second effective way to resolve some commercial disputes is mediation.In mediation proceedings, negotiations are conducted with the involvement of an expert (mediator), offering a range of possible solutions to resolve a dispute.

However, where the parties have included an arbitration clause into their contract, the lawyers of the complaining party may initiate an arbitration proceeding. The judgement of an independent and impartial arbitrator (arbitral award) is considered final and cannot be appealed. Therefore, if a company submits a dispute to arbitration, the chances are high that this dispute will be resolved within a reasonable timeframe.

Undoubtedly, alternative dispute resolution is an effective way for the majority of companies to secure timely payment of a debt by a foreign contractor. Years of international practice in this area have shown that arbitration has several key advantages over traditional litigation.

As a rule, litigation proves to be lengthy and often includes considerable costs, such as legal and court fees. On the other hand, effective negotiations or mediation can lead to a settlement of a dispute within just several days. Notably, the fees of a mediator are relatively low, if compared to those of a litigation attorney.

The final outcome in litigation proceedings is a court’s judgement, which often forces the losing party to go through a costly appeal in order to protect its core business interests. In contrast, when a dispute is settled through negotiations or mediation, there is always space for the parties to reach common ground and come up with a solution favouring both partners.

The losing parties, after going through an exhausting litigation and having spent lots of money on court and legal fees, rarely consider the final judgement to be completely fair. Therefore, it is not uncommon that some companies attempt to hinder the timely execution of a judgement or even openly oppose it, making it very difficult for the winning party to enforce its rights. However, if a dispute is settled through negotiations or mediation, the outcome of such proceedings is the result of mutual concessions and compromises, made by the parties. On average, there is much stronger willingness on the side of a breaching party to comply with the agreement, reached during negotiations or mediation, than with a court judgement.

Doing Business as Before

The imperative nature of a court judgement frequently leads to tensions and hostility between former business partners, leaving very little chance for them to restore a previously fruitful business relationship. However, if the dispute is resolved through alternative means, and a mutually acceptable compromise was reached, there is a much higher probability for business partners to preserve mutual trust and continue doing business just as before.

The key to success in alternative resolution of a commercial dispute is to hire legal experts that have rich practical experience in the main areas of dispute resolution: negotiations, mediation and arbitration.

The primary goal for dispute settlement lawyers, involved in resolving a commercial dispute through negotiations and mediation is to correlate the need of a creditor to obtain compensation in a speedy manner with the ability of a debtor to pay a debt.

The initial stage in a settlement of a commercial dispute includes gathering all the relevant information.

A creditor provides lawyers with all available documents that can be used to support its claims against the foreign counterparty. Based on the information provided, the lawyers develop the arguments to be used in the future negotiations with the debtor.

During the second stage, the lawyers search for contact information of the debtor and, subsequently, contact him.

First, the debtor receives an official notice, electronically and on paper, outlining the substance of a claim, the timeframe for payment of a debt, and possible legal consequences in case of non-payment. Afterwards, the lawyers contact the debtor by phone and persuade it to pay its debt. Often, the lawyers schedule a meeting with the debtor, where they offer the debtor options for effective restructuring of its debt.

Mediation is often used during the third stage of settlement of a commercial dispute.

Having made some preliminary arrangements with both parties, the dispute settlement lawyers conduct a mediation session, aimed at developing a mutually acceptable solution for the existing disagreement. The core function of a mediator in a mediation proceeding is to carefully lead the discussion towards a mutually beneficial outcome for both a creditor and a debtor, and to offer possible solutions on the most sensitive issues of a dispute.

If no satisfactory solution has been agreed upon during the mediation proceeding, the lawyers often assist the parties with forwarding the dispute to the arbitration stage. It should be noted, however, that in the vast majority of cases skilfully conducted negotiations or mediation proceedings lead to the successful settlement of commercial disputes.